The working principle of the cornflake production line

The process of making corn flakes is a very simple one, but it does have a few steps. The first thing to do is to take the raw corn and grind it into a fine powder. This can be done with a stone mill or by using a blender.

After the corn has been ground up, it needs to be sifted through a fine mesh sieve so that there are no large pieces of grain left in it.

The next step is to add sugar, salt and flavoring agents such as vanilla. After this, the mixture will be extruded onto trays and dried in an oven at 60 degrees Celsius for about 15 minutes until they are dry enough to eat.

Input corn into the receiving bin.

Corn is delivered to the plant in a truck, and unloaded onto conveyors that direct it to a receiving bin. The corn is then dumped into the receiving bin, where it is weighed and checked for foreign material.

Sorting: The sorter separates materials according to size and shape, ensuring that every piece of material in your product meets your specifications. 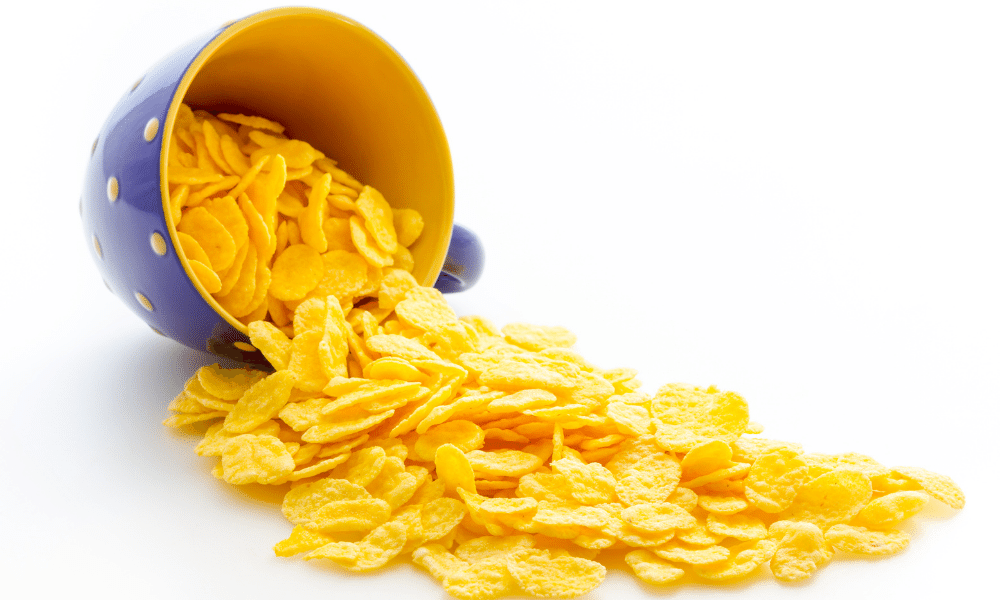 Pass the corn through a magnet to identify metal impurities.

The ground corn is then mixed with water, steam and other ingredients in a large mixing tank. The mixture is stirred until all of the ingredients are mixed well together. This mixture is called dough. The dough is then sent through rollers which are used to flatten out the dough into sheets that are about 1/4 inch thick. These sheets are dried by means of hot air which is blown over them for several minutes. After drying, these flattened sheets become flakes of corn cereal or flakes for short.

Flatten the corn kernels with a steam roller.

The next step in making corn flakes is grinding. The flakes are ground into smaller pieces, which will eventually become the cereal itself. This process can be done by hand with a mortar and pestle, or it can be done mechanically by using an industrial grinder that crushes the flakes into powder before sending them through another roller that flattens them into flakes again.

Pump the flattened kernels into a cooker.

The cooker can be either steam or water-steam type, which will depend on your raw material and end products.

Cooker: The corn flakes production line will have a dryer and an agglomerator after the cooker. The dryer is used to remove moisture from the cooked cornflakes, and it can be a rotary dryer or a belt dryer. The agglomerator crushes the cooked flakes into smaller particles, which allows them to become more cohesive during packaging.

Packing Machine: A packing machine is an essential component of any food processing plant. Packaging machines allow you to package your food in bags, boxes, cans and other containers for distribution or sale at wholesale or retail locations.

Flavoring Device: Cornflakes are usually flavored with sugar and other ingredients like salt or oil before being packaged for sale.

Pass the cooked kernels through a dry preheat grid.

The temperature of this grid is maintained at 100°C – 150°C by an electric heater. The kernels are then cooled down to room temperature by passing through a cooler.

The cooked corn is then passed through a blower that blows off any loose hulls and other impurities. After this process, the kernels become white in colour with a light yellow tinge on their surface due to partial oxidation of carotenoids.

The next step in the process is flaking. In this step, the cooked corn is passed through rollers which flatten out each kernel into thin sheets. These sheets are then broken up into small squares or flakes using specially designed rollers called breakers.

Use a second steam roller to further flatten the kernels.

This will remove any remaining moisture and help to prevent sticking. The resulting flakes should be uniform in thickness and have a light golden brown color. Any remaining green or yellow kernels are undesired and must be removed before packaging.

The salted and dried corn passes through the hot air ovens, which partially cook it. The hot air dries the kernels and makes them puffy, while also expanding them to allow more space for filling. In addition, heating breaks down some of the cell walls to make the starch in the grain more accessible to enzymes that will break it down later on in processing.

Flatten the corn one more time with a third steam roller.

The kernels are now ready for cooking and drying. The first two steam rollers are used to flatten the corn and make it thinner, while the third roller helps dry the corn before cooking. After this step, you can use a variety of processes to make different types of cereal.

Empty flattened corn into a cooler.

The flakes are separated from the corn kernels by a series of sieves that remove the largest pieces and leave the flakes behind. The flakes are then dried and cooled before they can be packaged and sold.

The flattening process is done by a flaker mill. The cooked flakes are then cooled and dried in the cooler section of the machine. The dried flakes are separated from each other by air currents and sent to a packing machine. In this process, the corn flakes are packed into plastic bags or boxes with labels printed on them.

This article is a systematic analysis of the stages, from harvesting to drying to packaging all the way through to distribution and marketing, that constitute the manufacturing process for a certain brand of Corn Flakes. Not only was it instructive to me about how each component stage fits together, but it helped me understand why the “food” we eat is not just for nutrition - but also for production. The better we design for this cycle, the less negative impact on our planet we have and the more efficient and sustainable our work becomes.