Nowadays, our life has become rich and colorful, we have more choices in diet, and various snacks make us have more happiness in our spare time. Kurkure is a snack that is widely welcomed by the public, especially among young people. Kurkure is similar to cheese, but the taste is different. Kurkure has a variety of flavors to choose from, and it tastes very crispy just like puffed food.The appearance of snacks has added a lot of fun to our lives, but troubles also follow. When people eat a lot of these snacks, obesity has become the biggest worry. Once people get fat, not only does it look unsightly, but it also appears. Many hidden health hazards are very detrimental to our health. 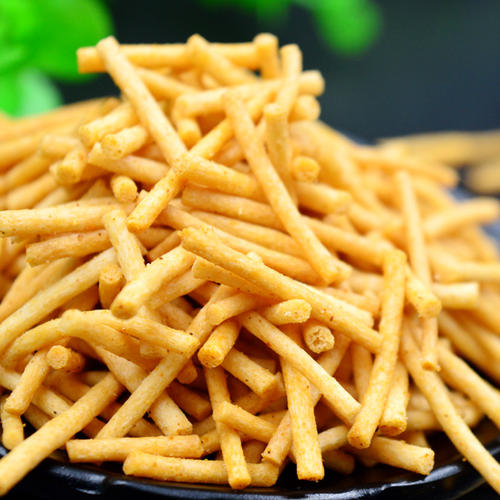 Fat is the main culprit for our gaining weight, so many people choose low-fat foods when buying snacks. Although many people like to eat kurkure very much, they have concerns about its ingredients, and even question whether kurkure contains pig fat.We are a professional food machinery manufacturer. Over the years, we have developed and produced corn flakes production lines, baby food production lines, and bread crumb production lines, all of which are world-renowned. We also have in-depth research on the kurkure production line. We have found that kurkure is a very healthy food in the production process for many years.In order to be able to produce a better quality kurkure production line, we have studied several of the most popular kurkure on the market and found that they do not contain pig fat. Not only that, kurkure is a food made entirely of some vegetarian ingredients. For example, rice, corn, vegetable oil, salt and sugar, etc.. They are completely vegetarian food, so everyone can eat with confidence.However, it is worth noting that although kurkure is a vegetarian food, its calories will be higher after frying, so it must be eaten in moderation and never in large quantities.The kurkure production line is the best equipment for the production of kurkure. After years of research, we have made this production line the most cost-effective. Low investment and high return are the biggest advantages of this production line. Not only that, the production line can realize automated production, with very high production efficiency, and the production process is clean and hygienic. At the same time, we can also provide customized services for manufacturers. You can tell us your needs, and our engineers will make the most suitable equipment for you!As a snack, although kurkure does not contain pig fat, it still cannot be eaten in large amounts. In fact, no matter what food it is, eating in large amounts will cause harm to our body. A moderate diet will bring us the healthiest lifestyle!If you are interested in kurkure, please contact us, we will serve you wholeheartedly!